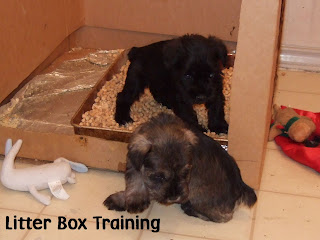 
This is something that we began with our litters. So many times we as doggie owners are out of the home for extended periods of times and the pups can not hold their pee. I think this will be a lot less stressful on the pups and they should be easier to train. We have had great success.
The litter we use is purchased on Chewy.com You want to purchase a newspaper pellet like Second Nature. Your puppy is used to being in their whelping pen which is a 4 x 4 area. They have been using a low cheap cat litter pan. They can just hop in and out quickly. That works great in their area. If you are placing a litterbox in the crate with them then I would just use a low cat litter pan. Your puppy is not old enough to search it out from accross the house. That would not happen until they are older. Just remember that the less space they have the less chance of error. Make their space small with just enough room for a bed, litterbox and water and food.
Schnauzers Of Taylor at 9:27 AM
Share